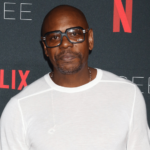 The Los Angeles Police Department confirmed that a 23-year-old man armed with a replica handgun that contained a knife blade was arrested for assault with a deadly weapon, after attacking comedian Dave Chappelle onstage Tuesday night as he performed at Los Angeles’ Hollywood Bowl arena.

LAPD identified the suspect as Isaiah Lee of Los Angeles, who was being held on $30,000 bail. Chappelle was not injured in the attack, and later joked with fellow comedian and actor Jamie Foxx onstage that he’d taken revenge on his attacker. Comedian Chris Rock was also at the show, and jokingly asked if the attacker was Will Smith (who made headlines for slapping Rock at the Academy Awards this past March).

Videos from audience members’ cellphones quickly flooding social media and showing a man appear to run onto the stage and tackle the comic.  Additional videos posted to Twitter appeared to show the person who charged Chappelle being detained outside the venue by police and then loaded into an ambulance with visible injuries. Witnesses say that the man was set upon by multiple people onstage immediately after he attacked Chappelle.