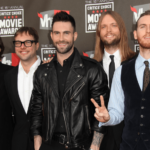 Maroon 5 shared details for the next leg of their 2022 World Tour, kicking off Saturday, July 30 at Moda Center in Portland, OR and hitting cities throughout Canada and North America before concluding on Saturday, August 20 at Centre Bell in Montreal, Quebec.

Maroon 5 are in Egypt for a monumental show at the Pyramids of Giza on May 3. A few days later on May 6, they headline Etihad Arena in Abu Dhabu, United Arab Emirates, and will then head to Tel Aviv for two shows at Hayarkon Park. After their initial show on May 9 quickly sold out, a second show on May 10 was added.