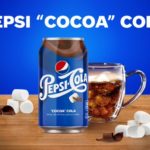 They announced Pepsi “Cocoa” Cola on Twitter yesterday and said if the post gets more than 2,021 retweets, they’ll release it early in 2021. It passed that mark in a matter of hours.

What’s sweeter than saying “bye” to the worst year ever? Pepsi “Cocoa” Cola – the latest concept from the Pepsi Test Kitchen.

Want to try and get your hands on it? 2,021 RTs and we’ll make a batch.#PepsiCocoaCola pic.twitter.com/WbZeGDGxVM