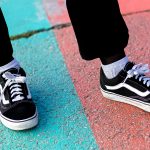 Our science department here at Kiss FM has been testing out the latest viral sensation, the “Vans Challenge”. Which started on twitter after the user @Ibelievthehype shared a video of his shoes being tossed through the air and landing upright, captioned: “Did you know it doesn’t matter how you throw your vans they will land facing up”. And that’s all it took, the #VansChallenge was born!

We attempted the challenge live on the Nuts in the Morning show.

Did you know it doesn’t matter how you throw your vans they will land facing up pic.twitter.com/nKVJCncW4H

I had to explain to my mom why I was throwing all my Van’s on the floor at 12AM. #Vanschallenge pic.twitter.com/USwUJkpyPX

Up Next
Nuts in the Morning