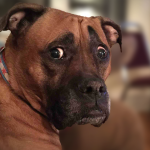 The internet could be considered the world’s greatest tool for knowledge and communication, but people would rather share pictures of their dog’s new sparkling glitter balls. The trend was first spotted in High Point, North Carolina by a salon that posted an image on their Facebook page Groomery Foolery to let customers know they are not in the business of glitter bombing your dog’s family jewels by saying “Please know that I love doing creative but, I will NOT be doing this. Posting for your entertainment.”

After the salon’s post, more images of dogs with glitter-coated testicles were showing up and most people were surprised to find that it was a growing trend. Some people called the scrotal decoration animal cruelty but since the corn syrup and glitter is edible, the only thing being hurt is these dogs’ pride.

Just went on Facebook and the first thing I saw was a picture of a dog’s balls covered in glitter. I think I’m done with that website for awhile…